During its use, the lubricating oil undergoes chemical-physical transformations that make it no more suitable to perform the functions it was originally intended for and they require its replacement.

Lubricating oil with greater amounts of such contaminants as organic oxidation products, aging materials, soot, wear debris and other dirt may not any more fully meet the demands and thus must be replaced. They are called used, spent or waste oils and should be collected and recycled in order to prevent the environment pollution and to preserve natural resources.

From an energy point of view re-refining of waste oil to manufacture a base oil conserves more energy than reprocessing the waste oil for use as a fuel. The energy required to manufacture re-refined oil from used oil is only one-third of the energy required to refine crude oil to produce virgin base oil. Therefore, re-refining is considered by many as a preferred option in terms of conserving resources, as well as minimizing waste and reducing damage to the environment.

Solvent extraction is a preferred method for improving oxidative stability and viscosity as well as temperature characteristics of base oils. The solvent selectively dissolves the undesired aromatic components, leaving alkanes, as a separate phase.

It should be mentioned in contrast to acid clay process, it operates at higher pressures, requires skilled operating system & qualified personnel.

Used oil is pre-treated to remove carbon sludge by flocculation. The residue sludge can be used in asphalt manufacturing. This process is done by a special type of polymer. The pre-treated oil from the previous step is passed through a flash evaporator under medium vacuum for water & light hydrocarbons separation. Water from this stage is sent to water treatment plant & separated light hydrocarbons are sent to storage tank. Treated water can be used in the plant’s cooling system. De-watered oil is then vacuum distilled for separation of light ends which can be used as fuel for boilers. Oil which is free from water & light hydrocarbons is sent to wiped film evaporators (WFEs), where it is distilled under high vacuum. The process can be carried out in several evaporators operating under various temperatures & pressures that allows separation of several oil cuts. For its improving, oil requires to be treated with polishing system. The advantages of this process are as follow: 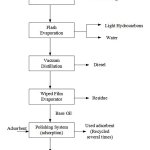